December 19 and 20—Yuma, The Physics of the Pop Top, and Home Depot

At the Go Westy van shop, in addition to having the lift and level, I also had them install a roof rack.  This is drilled directly into the pop top using tracks which serve to spread out the load along their length rather than bolting into only four spots.  That first night after the rack was installed, the pop top felt a lot heavier and was disinclined to stay “popped” initially.  With some persuasion, I managed to make it stay up for the night.

Let me explain a bit about Campervan dynamics: the hinge for the poptop is at the rear of the van, so that the greatest headroom when it is popped is close to the cab, which is where the stove is.  I always felt that the poptop was relatively light, and just sort of popped up with little effort.  Well, it turns out that I felt this because of the assistance of two devices, one on either side inside the van, which serve to push it up and keep it up.  These devices are a bit like shocks on the bottom of a car.  They are spring-loaded, or more precisely gas-loaded, so that they want to push apart.  When the top is lowered, the shocks are fully compressed.  When the top is up, they are at full extension.  Not only this but the power they generate is greatest when near full extension.  So when I am lowering the top down, the shocks offer the most resistance in the first few inches; as the top is close to being latched, the shocks offer little resistance and allow the top to close easily.

Well, the shocks on Bussy most likely date back to its birthday in 1997.  They were worn out.  With the difficulty of lifting the top with the bare roofrack, I did exercise what can only be described as a stroke of genius forethought.  I bought two new shocks, and the new way that these are made now includes a locking mechanism on one of them.  “Why not get two locking ones?”  The answer is that both are strong, even the non-locking one, and if I installed two locking ones, I run the risk of not being able to lower the top by myself.  I took the qualified and dependable advice of Go Westy and bought the set with one locking.  Nicholas looked at how they connected to the van and decided he could install them, “easily” was, I believe the adverb used.

On December 19, after we left Go Westy, we went to San Diego and picked up the loaner surfboard from Geoff and then purchased a new one in Ocean Beach.  That night, we drove east toward the border of California, Arizona and very near the Mexican border, to Yuma.  Yuma has nothing to recommend it other than the fact that we did eventually leave!

We could not find a suitable campground, the choices were either driving 18 miles on a dirt road or camping in a state park comprised of dunes and, you guessed it, dune buggies.  Having no desire for either of these off-road adventures nor the persons who would come with such places, we decided our best bet was to find a nice neighborhood in Yuma and camp there.  “Nice” does not come easily in Yuma, but we did find a neighborhood that offered Christmas lights at many of the homes and we decided this would be our safest and best bet.

Once satisfactorily parked, Nicholas got out to retrieve something from the back.  I unlocked the top and began to push up.  “I can’t budge this thing!  I need help!”  Even with two of us, the pop top with the rack and now loaded with two surfboards was simply not going up easily.  What to do?  With both of us pushing with all our might, we were able to raise the top.  Nicholas retrieved the new shocks and we began to try to install.

I’m going to spare you all the strenuous details of our philandering with these things.  Suffice to say that two hours later, we still had not succeeded in even replacing one of the shocks.  We could not compress the new shocks with our bare hands, we could not remove the old ones without unbolting the entire device from the top, the top was heavy, the space small, the night late, and our patience at an end.

So we slept.  Poor Nicholas had to sleep in the reclined front passenger seat.  The highlight of the night was the banging, thumping, tinny, and generally awful music system installed in a car that came to rest, for several hours, right up the street.  It was like being at a mind-numbing disco in an awful part of a city in Europe.

But morning eventually came.  I walked the dogs around the grass-less area.  Some cooped up pit bulls started fighting with each other because they were unable to get out and attack us (thankfully).  It was not the most progressive place in America, to say the least.

Not that we were leaving fine Yuma!  No, we went to the nearest Home Depot and Nicholas went in search of two-by-fours and other tools to work on the roof.  I remained in the van with the dogs and prepared oatmeal and brown sugar for the humans.  The dogs had already eaten.

We used a phone charging cord to measure the length of the boards we needed to prop up the top.  Nicholas was able to find a board at the steep price of $0.51 and cut it to fit.  He also found, just lying on the street in Yuma near where we had slept, a few pieces of rusty baling wire, which completed our needs.

After several tries, and with Abigail saying things like, “This is never going to work!”  and “what an terrible idea!” Nicholas was able to compress the shocks, Abigail wired them tight in this compressed state, and we cooperated in some fashion to remove the old shocks and install the new ones.  We did each one separately.  It was touch and go there for a while, what with the new shocks trying desperately to re-expand, and the bolts being difficult to install cleanly and directly.  But we managed one and then the other!

I was not the only one skeptical of this plan, Nicholas was doubtful too but he doubted that the new shocks would be strong enough to hold up the roof with the rack and boards.  I felt pretty sure that if we somehow managed the incredible feat of installing the impossible shocks, they would hold the roof.  Well, the good news is the shocks are more than strong enough.  We could probably put a mobile home up on top and still raise the roof!

After we were done, we went to the nearest Starbucks and I had a much needed (and I dare say, deserved! Soy latte!!

Here are some pictures of this project: 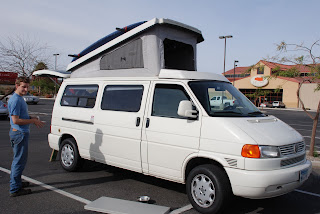 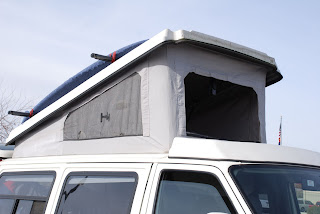 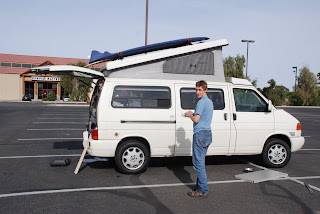 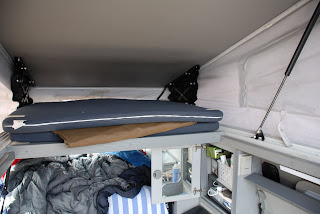 Today is my lucky day :)
Apple is giving review copies of iPad to 100 lucky person. Go to http://bit.ly/d9QOON and apply for it.