We spent a final USA night on December 21 in Tucson in Catalina campground, the same one where we had stayed the night before.  It is northwest Tucson and quiet and comfortable.  From there, we drove through Tucson on Hwy 77 which led us eventually to Interstate 10.  Just a few days later, this Interstate between Tucson and Phoenix had such high winds that a dust-storm formed and caused a serious pileup.  Luckily, we were headed the other way and encountered no such disaster.
From I-10, we split off and took Hwy 19 to Nogales.  I selected this border crossing because it is very high volume, was recommended in my book on Camping Mexico in an RV, and has a major Mexican highway leading from it down the west mainland coast.
As we left I-10, a few interesting things happened.  First, the mileposts converted to Kilometers almost immediately.  The exit numbers corresponded to these kilometers as well.  Second, the road was nearly completely void of all business, advertisements, basically anything familiarly American.  It felt like Mexico already.  We even saw some border agents hanging around one of the exits we took insearch of gas, a place to walk the dogs one last time, and a driver-passenger switch. 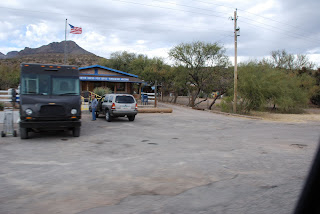 We ended up finding a last Chevron a few kilometers later and completing these tasks.

Nerves were high for both me and Nicholas as we approached the border.  I had done a ton of work in the past two months to prepare for this: New car insurance, special vaccines and meds for the dogs and for me, all the work on Bussy, lots of maps and planning.  I also brought with me lots of necessary documents for the border crossing.  I had spoken to the USDA on several occasions to make sure the dogs were properly documented, I spoke to several car insurance companies about driving in Mexico and I had consulted lots of books offering advice, travel tips, warnings, and also encouragements.  All in all, I was READY.

When we got to Nogales, a mere 65 miles south of Tucson, this is what we saw: 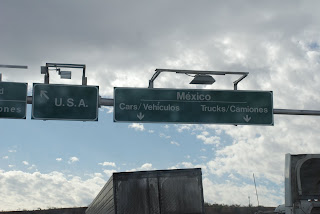 We followed these very clear signs, following all sorts of american license plates, trucks, RV's, basically the same mush of cars you'd see at any ferry terminal in Washington.  When it was our turn at the toll booth crossing, there were 4 or 5 men dressed in dark uniforms, some of them had black neck-warmer type things partially hiding their faces, which was weird and a little scary,  It also made it hard to understand the man when he spoke.  All he asked was: "Do you have more than $10,000 with you?" We said no and that was it.  The dogs did not bark, no one asked for any papers, passports, nothing.  We drove on!

Next to encounter was the checkpoint where we had to stop to buy the vehicle permit.  Here, Nicholas was able to stay in the car with the dogs and I went in to take care of this.  I waited in one line, filled out an immigration card similar to the cards on the airplane, then went to the booth operated by the national bank of some sort and presented my registration, driver's license, and passport.  She asked me if I had Mexican insurance and I was prompt with saying yes and providing her the papers.  She sort fo laughed at my over-preparedness and said she didn't need to see it.  She stamped everything and gave me the permit, which is taped onto the windshield next to the rear view mirror. 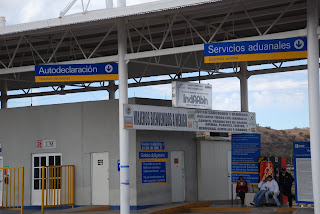 And then we just drove.  We saw beautiful countryside and after another hour, we became more calm and relaxed.  Here is what the land looked like: 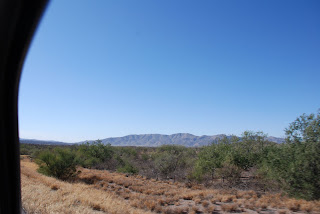 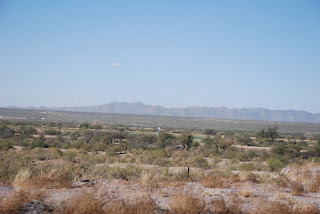 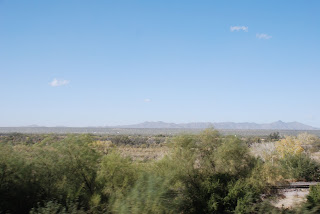 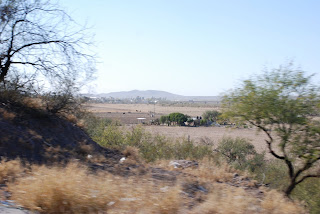 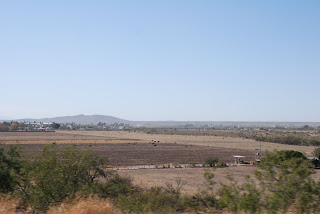 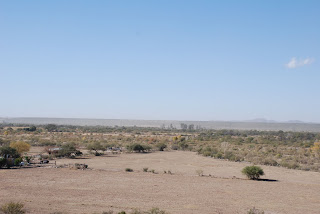 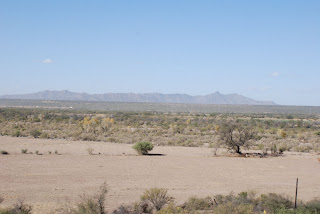 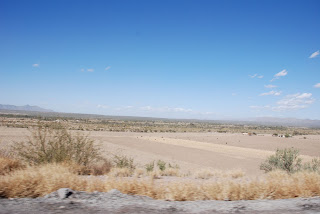