Go Westy loaned us a van to drive around town while the Bussy operation was in progress. We took a visit to Morro Bay, a small, friendly surfing and tourist town just north of Los Osos. Nicholas and I were both getting hungry so when we saw the sign for cinnamon buns, we tried to avert our eyes because we assumed they would be full of eggs and butter (we’re both vegan). We ended up parking right out front, and then spent 10 minutes trying to pop the top on the loaner (only to discover later that the top had long ago broken and was welded shut!). Nicholas wandered into the cinnamon bun shop before I could stop him and began chatting with the man there who was quite amused with our struggles trying to open the so-not-gonna-open roof. (“I’m not sure what that was about…but…”) He was very nice and gave us recommendations for food and surf shops, THEN he told us the buns were vegan so we enjoyed the cinnamon sugar goodness!


While munching on my bun, I caught the happy sound of a sea lion squawking. Here is what we found just across the street and down on the docks: 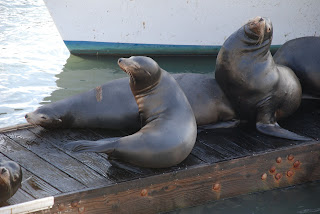 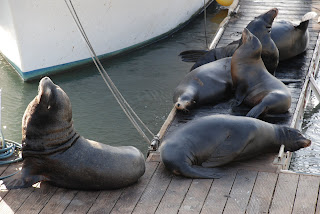 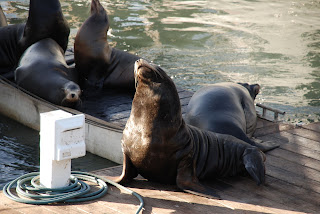 Inside the first surf shop, we spent a while chatting with a tan surfer guy about board shapes, materials, lengths, and brands. I fell for the Robert August “Wingnut II” but they only had a really long one. It was a great visit and we learned a lot.
Posted by Abigail at 3:15 PM