From Seattle it is about a 10 hour flight to Amsterdam and a 9-hour time change.  So I left home around 1pm and arrived into Amsterdam at 8 o'clock the next morning, which was interesting since I had not slept at all (the fatigue would not catch up to me until later...)

I lived in The Netherlands for several months in 2007 but I never did fly into or out of Schiphol.  So here are some pictures of this lovely airport, the Dutch generally know what they are doing when it comes to travel, organization and cleanliness.  It's pretty much the exact opposite of India! 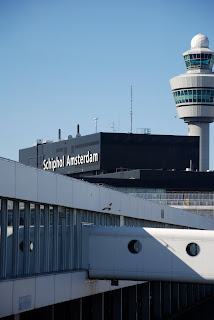 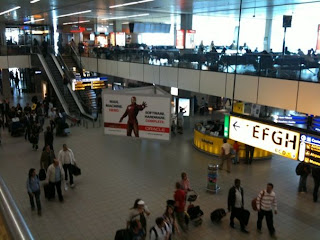 This is the plane I took from AMS to Mumbai: 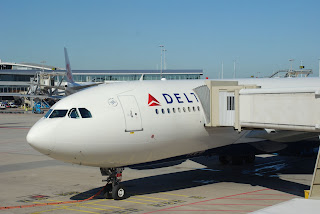 It was another 9 hour flight to Mumbai and 3 more hours in time change, and I got really really tired about half-way through this second flight.  I was able to snooze for maybe an hour and a half.

Once in Mumbai, the weight of the humid 90 degrees, even at 11 o'clock at night, was obvious immediately upon landing.  I had to wait nearly an hour for my two bags to arrive off the carousel.  The baggage claim in Mumbai was similar to a rugby match in the aggression to be right next to the conveyor belt.  Though I was tempted to start explaining that it would be much easier if everyone stood a few feet back so we could all see our bags coming and then grab them easily, I knew this would be fruitless.  As in Mexico, I have learned not to ask "Why?" and instead just join them!

I breezed through Immigration and Customs and managed to hire a taxi at the airport which took me to my hotel.  It was about 1am at this point, two days after I had left Seattle!  Despite only 90 minutes of sleep during the journey I could only muster about 5 hours of sleep that night before the super-Seattle-coffee-sensor in my brain kicked on and demanded attention.  And so I arose to several cups of decent coffee and a terrific breakfast of spicy vegetarian Indian food!

I spent the entire day exploring and will post my adventures in Mumbai shortly!
Posted by Abigail at 9:47 PM No comments:

Here is just a short update as I explore this new city and a new country for me:

Even though I was really tired last night, it took me a while to settle in to sleep.  Finally around 1:30am here in Mumbai I was able to sleep.  But I awoke at 6:30am and the idea of coffee was too powerful to even think of trying to sleep more.  I think I will manage to transfer myself to this new time zone almost immediately.  It was bizarre when I realized that I had woken up at 6pm Seattle time and was ready to go and start my day!

The hotel is very nice and has a view of the ocean.  It includes breakfast so I had a good one of hearty, spicy Indian food!  Also fruit and coffee.  I am able to make tea in my room so I am enjoying a cup now.

I took a short walk on the beach after breakfast ... it is indeed hot! Humid and sticky.  Of course I am exceedingly comfortable.  I am headed into the touristy central area of Mumbai shortly.  I waited for my luggage for seemingly almost an hour.  But I had no trouble whatever getting through immigration and customs.

All is going as well as I could have hoped for!

India is crazy.  I'll post some pictures later.
Posted by Abigail at 8:16 PM No comments: