Yup, we made it. I'm writing this first blog from Frankfurt (having connected a German plug to my voltage converter then to another adapter that removes the grounder and finally my computer -- I tested with my cell phone first to see if it would all blow up) and my blog instructions are now in German with no choice for English. How does the same web address come up in German when in Germany??

So, big news, a 10+ hour flight from Portland to Frankfurt is LONG! Especially with a large, middle-aged, German guy thrashing around in the seat in front of me. When traveling with a pet as carry-on, exit rows are not an option, so this guy with his seat laid back farther than posterity would have allowed, was basically in my lap the whole way, and banging his hefty weight around too. However, though I wish it were otherwise, my spilling of a full glass of red wine all over myself (and a bit on my young, friendly Estonian female neighbor) was not his fault. That was ALL ME. (Not to worry, they had more wine.)

So to carry-on a pet, she has to weigh less that 8kg. That is roughly 17.6 pounds and must include the bag the pet is in. Carrie on a good day is a solid 17.4; the bag, when strippped of everything that is removable, is 2 pounds. I had hoped that this whole weigh-in thing was a technicality that would not be enforced -- not so! My heart racing, I picked up Carrie in her bag and placed her on the scale... I held the straps of the bag in my left hand, supporting as much of her weight as I could without it being obvious, then I knelt down so I was eye-level with her and pretended to be "comforting" her when in truth, I stuck my other hand under the bag and hoisted a bit more weight. She rolled in at 7.8 kilos, and the coast was clear! (If only I'd had someone willing to do that for me, I might have rowed lightweight a few more years!)

Once on board, nothing too exciting, just the endurance of time. One very nice flight attendant confirmed for me that Joe was on board and that the cargo temperature was around 60 degrees F. (She initially said 26 degrees C, which made me panic, but then she corrected her math.) Speaking of math, there's a prize to the first person who can do the following problem. No pencils or paper allowed, I did it in my head in the middle of the night, and if you already know because of some kind of science background, then you're banned!

Here's the QUIZ: When is Celcius the same number as Fahrenheit? Get it? When do they cross. Here's a hint, the outdoor temp while we were in the air was below this temperature, by quite a bit, causing me much concern about Joe's wellbeing.

Once on the ground, Carrie and I began our trek to find Joe. We went far and yon, and finally located some people in a military-like confinement (affectionately called Frankfurt cargo) who said he was still at the vet. More then two hours after we landed, Joe was still "at the vet" and Carrie and I were starting to panic. Just when I had decided to ask the terse German man to telephone this vet, Joe's paperwork arrived. Carrie and I, now on foot, hiked to the Animal Area, then to the vet for the papers, then back to customs. At customs, they asked me Joe's "value" and I said, panicking, "why? what happened to him??" Nothing had happened to him, of course, I think it had something to do with import taxes. We went back and forth, where I was basically unable to name a price for my beloved Joe until they asked me his age. I said, 6 and a half. They said "months?" Me, "No, years!" At which point, they apparantly had a very easy time concluding that Joe was obviously worth nothing, and they stamped the papers. Oh and the customs guy didn't speak english so another shipper guy was translating for us, very nice man.

Back to the Animal Area, about 3 hours after landing, and putting in several miles, Carrie and I were at last reunited with Joe. Carrie immediately started defending him against attack (she didn't do much for me, it turns out all the barking at strangers is just for Joe's safety!) He promptly went outside in this industrial parking lot and peed straight on the pavement, with no trees in sight.

During the time waiting for Joe, and becoming increasingly worried about him, I wondered what in hell convinced me that taking the dogs to Europe would be a good idea. But when we finally, hours later, arrived at the luxurious Steigenberger Hotel, with handsome bellhops and damask duvets, the doubts were erased. Joe and Carrie were meant for Europe, and we'll have a great time. So far, we've had a lot to eat, taken naps, watched some World Cup Biathlon competition on TV (awesome!!) and taken a little walk about the hotel.

Here's the present state of affairs: 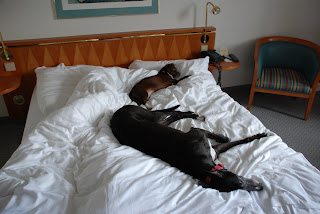 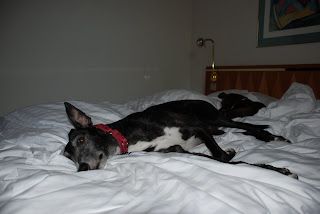 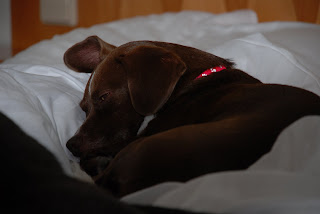