So many adventures in the last few days, I’ll start with the most recent. We spent the first day of the New Year on a quest for a good surfing spot. I have a pocket size book on surfing Mainland Mexico (also the same book covering surfing Central America). In the Mazatlan area, a spot called Marmol is listed as an all levels, all year round spot just north of the city. The pocket book just says: Exit the freeway, go through Marmol and you’re there!

Well let’s look at that. First of all, “exit.” The freeway, which by the way, isn’t free, it’s a “cuota” road costing about US$4 per 50 miles, doesn’t have on or off ramps for the minor towns. My iPhone offers a GPS so I could watch our progress on the freeway and I could see easily that we were missing Marmol. We could see overpasses, small, one-lane bridges over the freeway but we could see no clear way of getting on any of them. Finally, as the last possibility to Marmol approached, we hit the brakes and made a hard right turn onto gravel immediately from the freeway. We went up and over some train tracks, and continued west. I could see the road we drove on the map, so I wasn’t without hope of reaching the shore.

As this road narrowed, became more and more holes and dips and rocks and trees, my hope dwindled. Finally, we were driving between two fields and some workers yelled out to us, “Stop, hay un rio!” Ahh, a river, wonderful. “Donde esta la playa?” I asked. Most of the response was too fast for me to understand but we deduced that we needed to turn around, drive back north a ways and then head west. Gracias.

We turned around, bounced our way back to the highway and crossed it, heading to a town we hoped would be Marmol. When we got there, there was no way out to the west, we were not in Marmol, but a nice man came running up to us and asked us, in English!, what we were looking for.

As we chatted with him, a rooster popped up on our hood and pecked around near the wipers. I was like, um, there’s a rooster on the car. OMG. Hahaha!

We told him we were looking for the Marmol beach and he gave us pretty good directions. Get back on the freeway and take the exit about 5 km north. We were off again (the rooster had departed our vehicle!) The exit we were now looking for should be right before the toll booth. We drove, we could see the overpass we wanted, we could see the toll booth. And yet, ahhh, we drove right past the “exit” again! A quick u-turn, yes on the highway, we did it near the toll both so that all vehicles were going slowly and it was safe, and we found the exit.

A decent dirt road, some cobblestones, and even a little pavement found us shortly in Marmol, then finally at the beach! So beautiful! This area is totally undeveloped, no houses, no billboards, no electrical wires.

We camped out here for two nights and then, on January 1, decided to pursue the surfing. The surf area is a little ways up the beach and around a rock outcropping from our camp spot. We had gone out there on the first day during low tide but decided not to surf. By day 3, we were surfing determined. We headed out as the high tide was retreating. Ahh, interesting, the last part of the road that is accessible and firm during low tide was 4 feet deep in water in the morning high tide. So we chatted with three local guys carrying fishing gear and decided we could park on a high part of the road and walk the last part to the beach.

Challenge Number 1: a pack of 6 or 7 lazy-looking but nonetheless potential trouble-causing dogs lay between us and the only walking path to the beach. Nicholas and I worked out a plan where I would carry Robert and Carrie, Nick would walk with us, and I would leave him with them on the far side of the walking bridge. This we accomplished with not so much as a sideways look from the local dogs. I returned for Joe. Unable, or at least unwilling, to carry his 80 pound frame 50 yards, I simply walked him as quickly and quietly toward the bridge. Not quickly nor quietly enough. The dogs began barking and following us. Ahh, heart racing. I yelled at the dogs which some of them respected but a couple continued to follow me and Joe.

These local dogs are feral, mostly unneutered and unspayed, almost certainly unvaccinated, and possibly not nice. I’m of course an animal lover, but I will defend my little family with all the force at my command if necessary. One tool I have on this trip that is new to me was donated to the Cause of Cromwell Safety by my mom: several pocket size containers of mace. I have one of these, along with a pocket knife, attached to my keys and, as I walked with Joe, I began to fumble with my backpack to retrieve the key chain. Undecided as to whether it was best to keep moving or thus arm myself, I finally stopped for a moment to get my hands on the mace and then kept going. Finally, without the use of any weapons, we got the dogs to back off and the Cromwell’s were across the bridge and on our way to the beach. The pack of dogs did not seem interested enough to pursue us. But, nerves were high among all of us, to say the least. Nicholas asked me: Do you still want to surf? Well, there wasn’t any going back to the car at this point, so yes, I did want to surf. We may as well wait until low tide when we can pull the van closer and make our escape more easily. So he went back for the surfboard and we proceeded!

Challenge Number 2: Nicholas was less enthused on the surfing than I was, so he stayed on land with the dogs while I ventured out. The waves were not big but they were messy and unsurfable. After bouncing around for a while on my brand new Robert August Nine Foot “What I Ride” longboard, which I love!, I went back in.

Then began our exit from this locale. Challenge number 3: The tide was decidedly lower, though not all the way down, and we could walk out on the other side away from the pack of dogs. When I say “walk out” I don’t mean without getting our feet wet. We had to ford a stream that was about 3 feet deep! But it was much safer an exit than our entrance had been. The funniest part of all of this had to be when Nicholas took off his pants, donned the backpack, and set off through the stream, with all the seriousness at his command, in his underpants! He was off to bring the van around closer. I did not attempt to stop my laughter, a welcome release after the tension of the morning! When he returned, he carried Robert and a wriggling Carrie while I hoisted the I-can’t-swim-because-I’m-a-greyhound-Joe, and off we went across the stream. I had thought we were through the deepest part of it and set Joe down where he was up to his elbows, only to discover, and witness his panic, that we had deeper yet to go. Poor Joe, he really was afraid and I was unable to help him other than to guide him to the other side by his leash while he flailed.

And so distraught, the little family made it back to the van. We sat for a few minutes had some water and a snack, and then departed for a hopefully easier future.

We went back through the outskirts of Mazatlan, hit a Walmart (Yes, I am shopping at Walmart. Hell has officially frozen over. But they are the only store we have found in Mexico, and we have tried them all, which sells tofu), and loaded up on water and other staples. Nicholas picked out a nice, quiet beachfront campground in the small town of Teacapan, where I am now drafting this blog post from beneath a thatch roof, on a balcony overlooking the beach while the dogs nap peacefully. As a special treat for myself today, I am on my second pot of coffee! Calm has returned!
Posted by Abigail at 10:39 AM No comments: 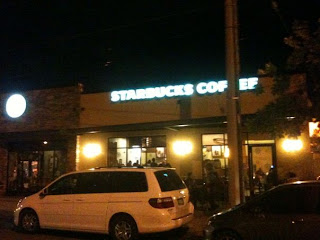 I ran across the Mazatlan Starbucks on my way to a meeting last night.  Here's a quick picture.  We returned today after surfing attempt #1 and did the blogging from here!  These are live action photos of me working right now!! 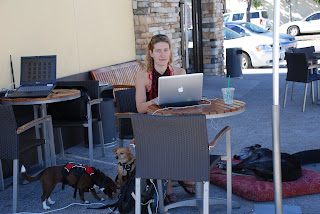 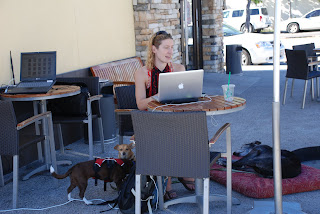 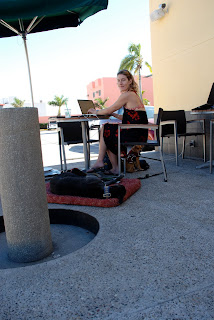 Posted by Abigail at 1:14 PM No comments:

We spent a Saturday night at a lovely, tiny beach town south of Huatabampo, called Huatabampito.  Here are some pictures from this adventure!  I caught the sun descending into the water anf just kept clicking! 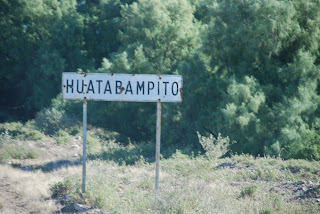 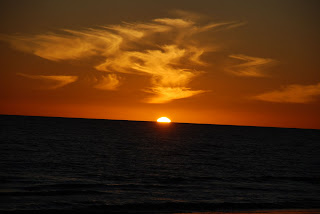 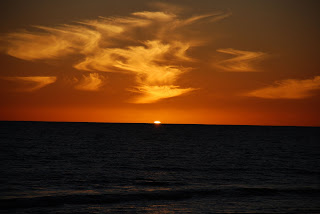 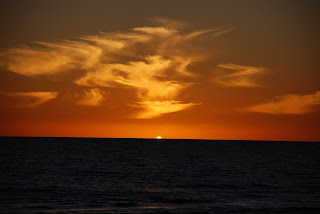 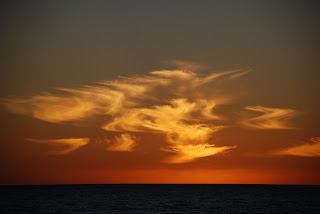 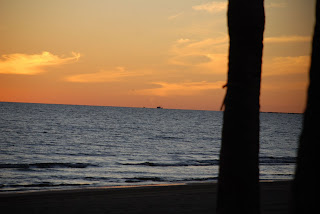 Posted by Abigail at 1:06 PM No comments:

Many days have passed since my last update...apologies!
Here are some pictures of Joe, Carrie and Robert to start off.  They are definitely getting their beach legs! 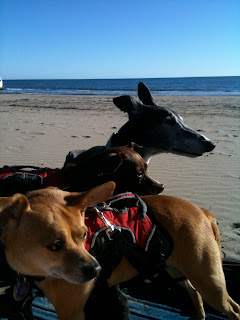 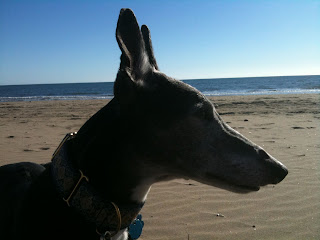 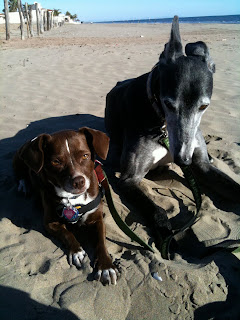 We have traveled through some beautiful countryside between Bahia Kino, then to Huatabambito and now to Mazatlan.  Here are some pictures of our travels: 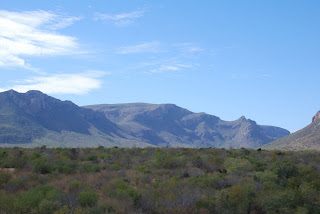 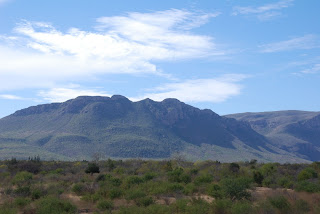 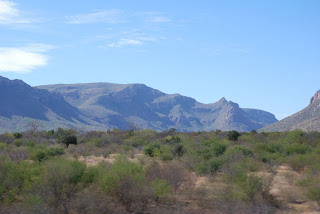 The highway is so well made.  It is better than most highways in the US! 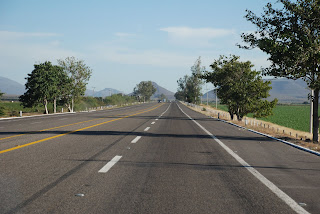 I'm having a difficult internet connection so I'll get this post uploaded and then do another separately! 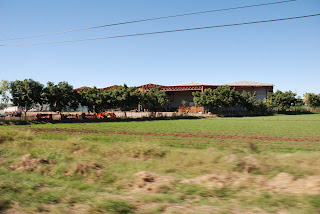 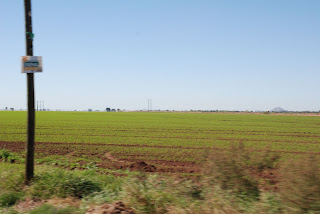