The return through Austria, Ingolstadt, and Frankfurt

With less than a week to go before the van was due back in Dusseldorf, we departed Slovenia and made our way back North. I found some of the best campsites of the trip in these last days, and enjoyed solitude, jogging with my iPod, and playing with the dogs in the now-nearly-Summer weather. 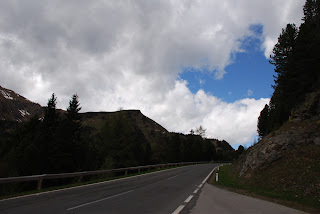 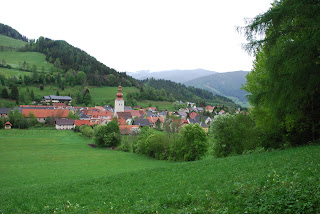 Here is one such camping platz, taken from the lone bench on the big hill overlooking: 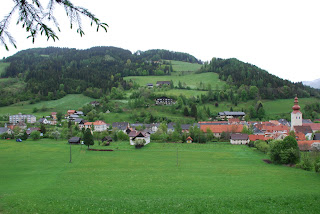 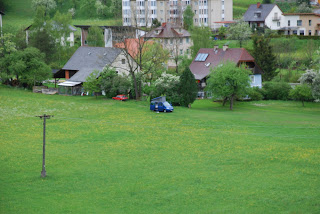 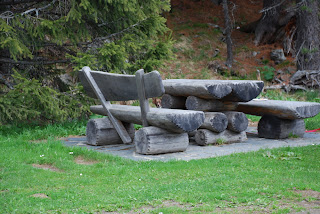 Once back in Germany, having skipped the Porsche factory in Stuttgart and the BMW factory in Munich, I would not miss my favorite-- the Audi factory in Ingolstadt. The weather had cooled, which was nice for the dogs who camped in the van outside the Audi Forum Museum while I dreamed of fast cars... I was so excited upon entering just the information and ticket room, and the guy who directed me was thrilled to have someone so eager about Audis! "You can even see the R8 over there!" he exclaimed. Aahh, car people, it was super fun.

The museum contains three levels in a big round building with glass all around. I started at the top and walked through the ages of Auto Union developments as I descended floors. The museum provided a great deal of history, not only about German auto manufacturing but also about what else was going on in the world concurrently in entertainment, world affairs, and the global economy. Facts included when the first license plates were created, where in America the first parking meter appeared (booo!), moon landings, assassinations, etc.

After clearing out the gift shop of posters and stickers, I made the mistake of sitting in the newest S6 Avant in the showroom--wow! (Not to worry, Axl still has many more miles in him...though he was pleased to hear about his fast and fancy new cousins in Germany).

And finally to Frankfurt to a less-fancy but still very nice InterCity Hotel. We stayed 4 nights, longer than initially planned, but it was nice to regroup, repack, clean our dirty selves, and sleep in a real bed. The dogs were not afraid of the airport this time around, nor was I so worried for them. Seasoned travelers they have become!