...are stolen every year in The Netherlands. For a nation of only 16 million people, that seems like a high percentage! So I guess I should be content that this was all that happened to my little clunker: 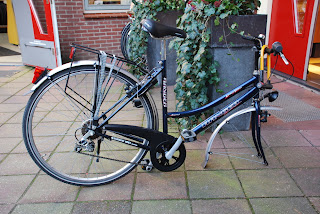 On Friday last week, I had my first meeting with other students. I've been in Europe for over 3 weeks now and had just about forgotten why I'd come so far away. Ah yes, some law school.

The Friday meeting was an orientation for all the incoming international students. Utrecht University is the largest university in The Netherlands, about 30,000 students, so roughly the size of UW. The orientation included undergraduates as well as masters and PhD students. Among the people I met the first day were some kids (yes, I would guess age 19 or so) from Oklahoma State, University of Wisconsin, and Minnesota. But there are students from Ireland, Scotland, Denmark, Singapore, a significant Australian contingent, and others.

On Saturday, the adventures began..."social" orientation for the internationals:

I was supposed to join my assigned group at 2pm for a climb of the Dom Tower and a city tour. I left my apartment around 1:45 and was greeted with the above sad photograph of the bicycle. Plans foiled.

I've been all around Utrecht and didn't need the city tour, but I was very eager to climb the Dom as it was a gorgeous clear sunny day and I had not yet scaled it magnificent Gothic heights.

Mustering courage to look like a very sad non-local, I unlocked the wheel-challenged bicycle and walked up the street to the nearest bike shop.

The used clunker that initially cost Euro 110., had already a new seat for Euro 47 and was about to get a new front wheel for another Euro 47. Awesome. I now understand why two locks, that are worth more than the bike itself, are used by the natives. It is not the VALUE of the bike that it protected, it is the fact that there IS a bike that is protected with the elaborate locking systems!
Posted by Abigail at 2:39 AM