I know you've all been waiting for pictures of the Cats at the VSPCA and the wait is over!  Jump for joy! 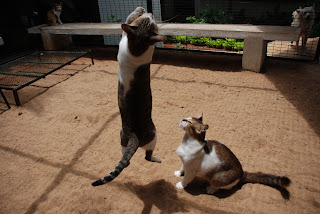 The VSPCA is home to many rescued cats and kittens.  They have a beautiful facility built especially for them.  When I was preparing to travel to India, I received many donations from my friends of toys, medicines, leashes and collars and other useful things for all the animals at the shelter.

Among these donations were dozens of colorful, handmade pockets of catnip that my friend Claudine put together for the kitties in India.  Here is Sarada, the shelter manager for all the small animals of the VSPCA, getting ready to give the cats the catnip toys! 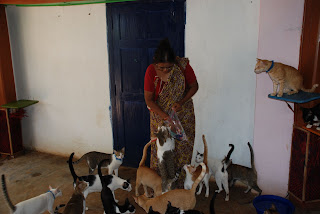 A few of the cats weren't quite sure about this... 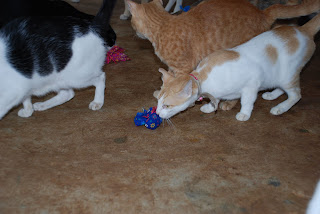 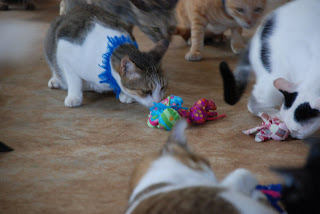 While most were overjoyed with their new presents!! 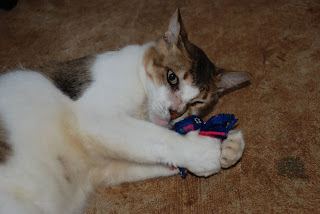 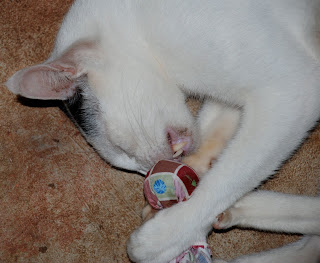 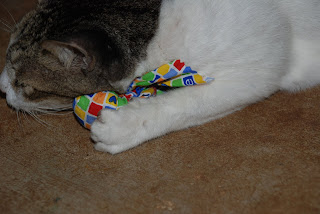 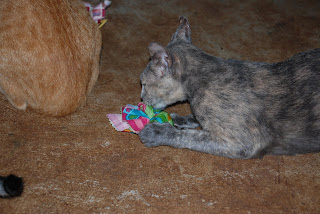 Here is the whole group of kitties playing and roaming around with the catnip: 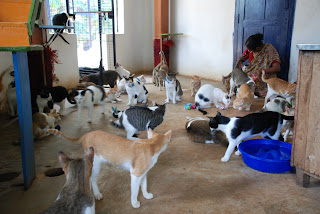 The afternoon before my flight to India, my friend Shelly brought by a special delivery for the cats: two long wands, approximately 3 feet long with fuzzy ends that dangle from a piece of string.  As I stared at these wands and my already packed suitcase, I decided that if I curved them gently, they would fit from one corner of the large suitcase to the other.  I just had to hope nobody would open the suitcase in the airport...the toys would come springing out!

Having never had much interaction with cats, I wasn't quite sure how to play with them.  I discovered that it isn't very hard, even a dog person can figure it out! 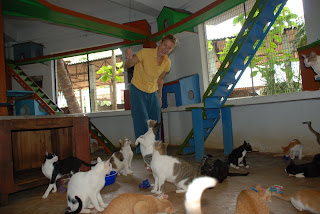 At first I thought I was pretty smart and quick... 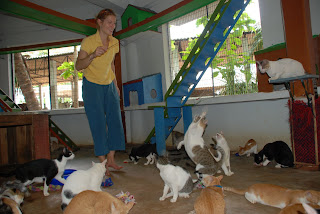 But this fellow was much quicker, here I am extracting the toy from his grasp! 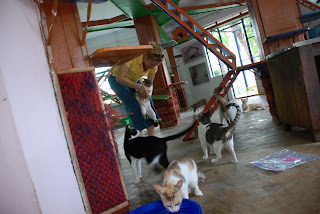 These two look like they are going for a jump ball in the NBA: 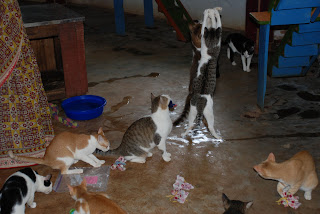 These cats were primarily rescued from the city streets in Visakhapatnam as kittens.  Many of the town's residents don't mind having an adult cat around the house to keep the rat population down.  But if she has a litter of kittens, who meow as kittens will and demand attention, the humans will throw them away.  And I do mean thrown away like garbage.

These lovely cats have been found in horrific places: in garbage cans; in bags thrown into the sewers that run alongside the streets; some even have been carried out to the beach in the city runoff and were rescued just short of drowning in the ocean.  These kittens make their way to the VSPCA shelter only if some kindhearted person overhears their meowing calls for help, someone who knows these sounds shouldn't be coming from these places, and cares enough to call the VSPCA.

Sarada bottle-fed these kittens with specially-donated glass bottles from the US.  These bottles had tiny little nipples so the tiny little kittens, some so small they didn't even have hair yet, could be nourished into life.

Now these cats have a wonderful life in their beautiful jungle gym home, with toys and lots of love. 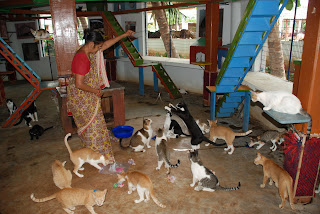 They have several fully-fenced outdoor areas in addition to their inside playroom: 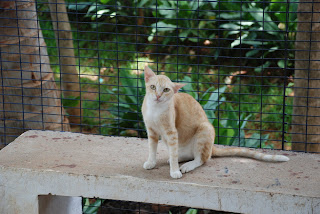 Check out the guy lounging in the sun behind me: 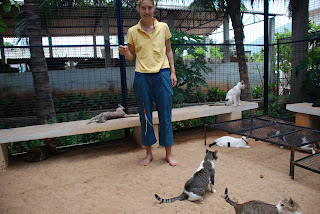 New he's joining in the fun! 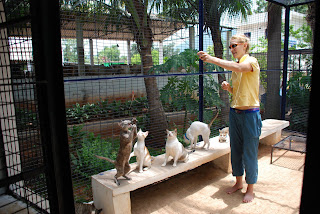 Look at how this "dog-lover" was treated after spending a few hours with the cats!
Step One: Contemplating the human. 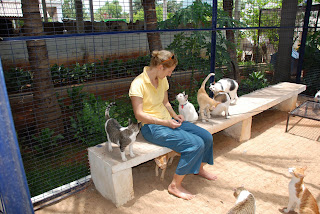 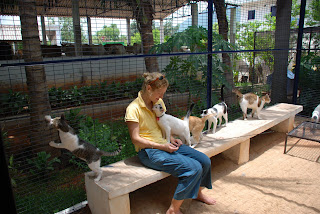 These cats love to play... 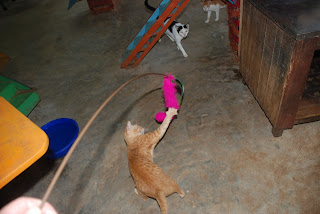 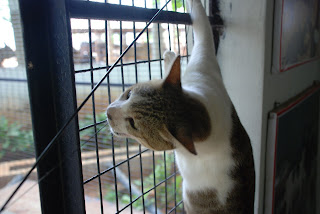 And wrangle that furious pink monster! 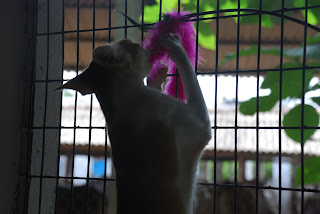 VSPCA continues to rescue cats and kittens and welcome them into the shelter.  The life they have here is the best and doesn't even compare to life on the street.

High Five to Everybody who gave me supplies for the Indian animals (and from the VSPCA cats and for the photos in this post of cats leaping into the air, special thanks to Claudine and Shelly!) 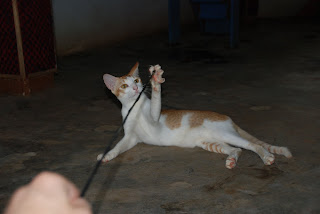 Oh What a beautiful blog! What great pictures!! What a wonderful time you had!! And what a wonderful time those kitties had with their new toys!! (and I'm sure they are still playing with them, thinking of you even now!!)
My favorite cat at VSPCA is Milky -- the kitty with one eye-- and I think that was him, warming up to you in one of the pictures.
Thank you for bringing all that joy to the kitties and their wonderful caretakers!!

If I could summarize the cat's experience of humans, and your post.
To be Thrown away. Some joy! Contemplation. Followed by acceptance.
Of course for these cats it wouldn't be possible without VSPCA because it would have closed at the first step of perishing anonymously and quite alone.
The photo of the kitty nuzzling you is really so heartwarming.

Hi Jamie,
Thank you for your poetic comment! I'm so glad you have enjoyed this post. Many thanks from here :-)

Hi ACE,
Thanks for commenting! I'm so glad you enjoyed the pictures and I especially pleased to hear from another volunteer who has been to VSPCA!!

Oh wow, those pictures are incredible. It looks like you had an amazing time and all the kitty's are too precious for words! Would love to visit there one day........