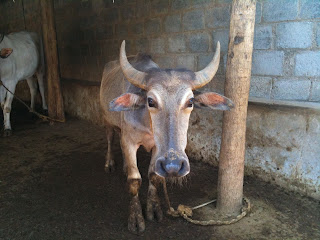 George (so named for George Bailey, the despair-filled, yet redeemed, main character in It's A Wonderful Life) was found lying in a road, unmoving.  He had been hit by an auto, fell down and, having gone into shock, refused to get up.  The VSPCA SOS team was called in to rescue George and they brought him to the shelter.  For more than a week, George continued to lie down, did not move, would not eat and was terrified of anyone coming near him.

But now, many months later, he has recovered and is a happy and engaging fellow! 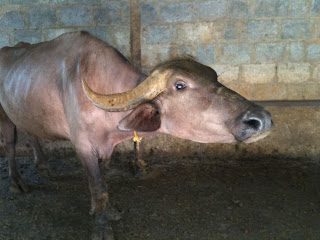 As I was taking pictures of him, he continued to preen and engage with me, making faces and sniffing me out with curiosity! 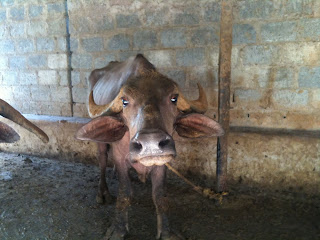 George is a Water Buffalo and has many friends at the VSPCA shelter, all of whom were rescued from injury or some cruel environment.  At the shelter he has a terrific life in the large animal area, with both a covered area of stalls and a large back field in which to roam outside.

Pothuraju is one of George's Buffalo companions, although he is still in his early stages of recovery and was *not* so eager for me to come close and snap his photo: 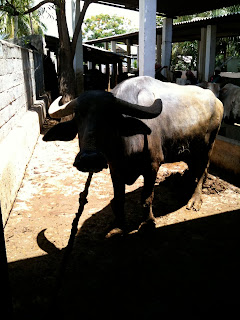 A few months ago, Pothuraju's mother was walking down a road when a milk van sideswiped her, breaking both of her right legs.  VSPCA came to her rescue, having no idea yet that she was pregnant, and transported her to the shelter.  The very next day Pothuraju was born at the shelter!  Sadly for his mother, due to the shock of her trauma, her broken legs and the birth of her boy, she died during the birth.
Having no mother to feed him, Pothuraju was bottle-fed by Ramarao, the man pictured here: 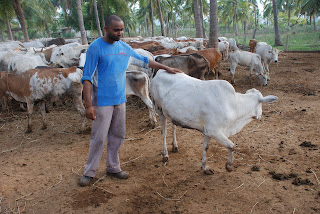 Ramarao has been at the shelter since he was a child and his parents brought him here, and has dedicated his time and love to the cows and buffalo, nursing dozens of the babies from a bottle!

Here are some of the truly happy cows that Ramarao looks after: 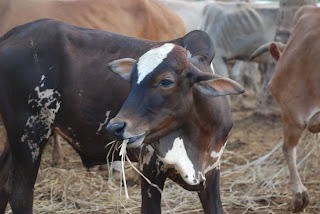 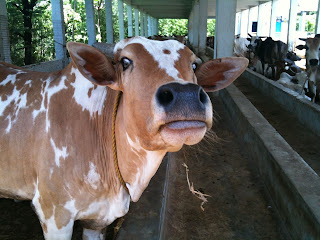 Rani and her daughter are particularly entertaining to all the staff because they are the cleanest cows at the shelter.  Rani is pure white and keeps herself exceptionally clean: 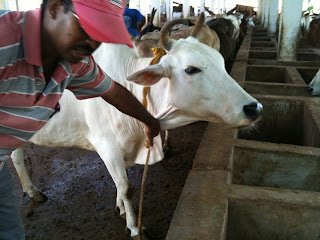 Look how clean her feet are!! 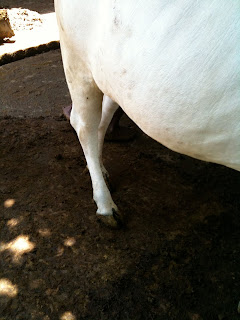 Rani cleans herself every day and is very careful to lie down for rest only when the dirt beneath her is dry.  She will not lie down in the mud!  In comparison, here is what a less conscientious cow looks like (no offense intended to this guy, of course!) 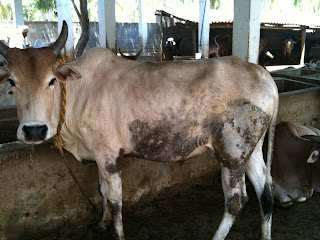 Among her quirks is the fact that Rani refused to dirty herself by allowing her calf to nurse.  So Ramarao had to bottle-feed her baby for her.  Her daughter inherited the "neat gene" and is beautiful like her mother.  She is the golden brown cow here: 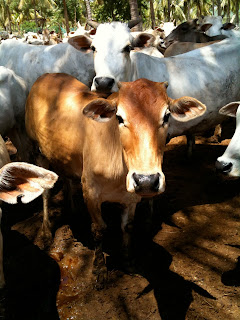 Last among the cow and buffalo friends whose stories I recently heard is Baddu: 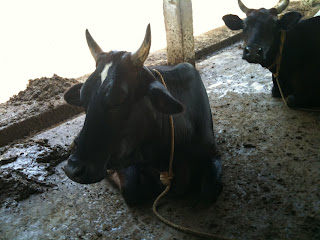 Baddu's mother was Gowari, a very smart cow owned by a caring man in town.  One day, some thieves from a slaughterhouse came through town and stole Gowari and many other cows.  The man, discovering that Gowari was missing, went into the street and called her name everywhere as he walked.  Gowari, from inside the truck of her captors, heard her human calling her and began to call back to him, mooing and stomping her feet.  The man called the VSPCA to report her theft and the shelter rescued all the cows inside the truck, saving them from illegal slaughter.

The man was so grateful that he gave Gowari to the VSPCA so that she would be safe and have a nice place to live out her days.  Some time later, her daughter Baddu was born.  I guess it must be very hard on cows and buffalo to give birth because Gowari also died during the birth of Baddu.  But Baddu has been able to grow up with the friends of her mother who were all rescued that day by VSPCA!

Here are some of the staff of the large animal section, hard at work keeping the stalls clean: 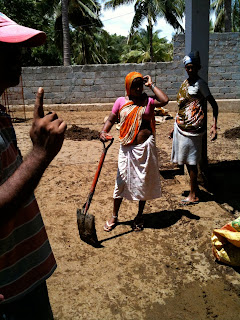 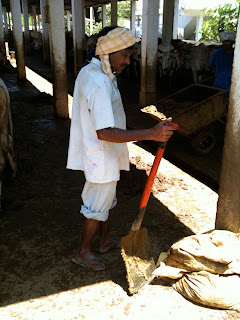 And here I am getting to know (carefully!) some of the cows in the field! 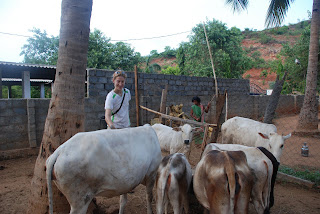 As with all the animals at the VSPCA, each of these cows and buffalo is available for sponsorship.  Please go to www.vspca.org for more information or to make a donation to assist VSPCA in continuing this terrific work.  If you are interested in an animal not yet pictured on the Sponsorship page, please email me: awscromwell@gmail.com

We are fund raising for a shed as many of the buffaloes do not have a proper one. VSPCA is indebted to
Abigail for telling the stories so well and with such love, after what they have been through these buffaloes deserve no less. VSPCA currently has over 600 rescued buffaloes and cows.

Such an amazing post. You gave a whole different perspective to cows and buffaloes that we see everywhere here!