Well, it finally happened.  First Nicholas and then me.  The dreaded yet somehow inevitable, "if you go to Mexico you'll get sick" event.  It began on Monday night for Nicholas.  The most puzzling thing is that I did not succumb until Thursday afternoon, and was in fact entirely strong and healthy for several days while he lay suffering.

The cause of our misery will probably remain undiscovered.  We ate the same dinner together on Monday night, neither of us has consumed any local unpurified water, and we have been very careful with our dishes, toothbrushes, etc.  Yet I do think it is inevitable.  Nearly everyone who has moved here or has spent a significant time here has a story of it: the body's purge.

And it isn't like ordinary food poisoning where you suffer for 24 hours and then its over.  I was acutely ill for a solid forty-eight hours, beginning Thursday afternoon and lifting sometime Saturday afternoon.  And even now, Sunday, I am not exactly strong and happy.  Re-introducing food is hard on the body when it has emptied itself and remained empty for 2 days.

One of the hardest factors was that I was forced to forgo my nornal pot of coffee in the morning for two mornings in a row!  So I was grouchy and lethargic in addition to being weak and nauseous.  In other words, don't you all just wish you were here to join in the fun!

Nicholas' recovery was even longer, he fell ill on Monday night and was only really eating again Saturday, when I watched him eat two avocados and a seemingly entire loaf of bread (which was awfully challenging in my state of not-quite-recovery!)  But it was a very good sign that we was finally getting his strength and appetite back.  After he did that, he said "I'm still hungry!!"  I said "Groan!"

The great news is that the dogs don't have whatever it was that we humans had.  Carrie was very worried and anxious for me as I lay unmoving in the van for 36 hours, and she basically refused to eat for the same period of time (perhaps she just wanted to commiserate!)  But Robert and Joe ate like champions and show no signs of illness.  Carrie is tired after all that worry so I took her to the beach yesterday afternoon in an effort to show her that all was going to be okay.  She seemed skeptical but relieved too.

After I walked the dogs for a little while, I laid my towel down on the sand, with a cool breeze and partial shade, and lay down where I could see the ocean.  I felt the warm sand beneath my tired body as I rested and it occurred to me that I have always feared getting sick when away from home.  But really, of all the times that I have been sick, this has to be one of the best locations.  When the first pangs of stomach pain were hitting me on Thursday night, I pulled my mattress out of the van and lay down staring up at the palm trees.  Darkness was falling, Nicholas knew what was happening to me to he took care of the dogs, their dinner and walks, and he also prepared the van for me to sleep in (we had both been sleeping in our tents closer the ocean).  I continued to lie there (pretty much groaning and eventually getting sick in the bushes) as darkness fell, and, despite the onset of this illness, I was enjoying my surroundings.  I don't have a picture of the palms with the stars in the night sky, but here is one from the daytime: 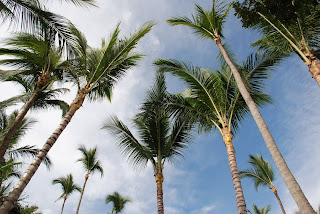 I lay there and watched the palms swaying gently and heard the birds singing and I was warm and my world was okay in the ways that really mattered.  As darkness fell, the stars came out brilliantly and clearly.  As my body began to purge itself of everything, I remained conscious of this place and its wild beauty and continued to be grateful that this was a temporary fate, that it would pass, and that I was nearly always healthy and happy.  There have been days, many days sadly, when this was not the case.  But those days are behind me and I will accept an occasional case of food poisoning, or whatever this was, if only to remember how miserable it is to feel that way.

Here are some more pictures of Sayulita and our magical campground: 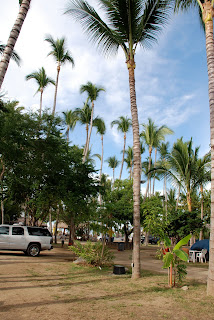 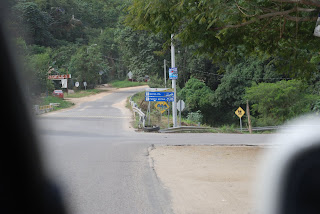 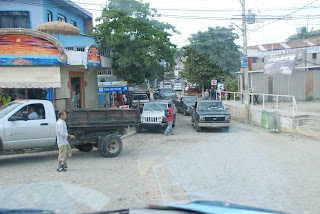 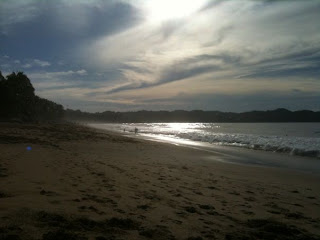 We now have piles of laundry, not much food, lots of Gatorade and water, and no pictures yet of the two of us surfing!  (I assure you, we really really have both been surfing!  Many times in fact!)

We are planning on leaving Tuesday, destination Belize, in order to meet the wonderful friends Jeff and Steve who will meet us there for SCUBA and fun.  If we leave on Tuesday the 19th we will have 10 days to reach Belize by the time the guys arrive from Boston.  In the meantime, we are continuing to recover, eat, drink, and will be prioritizing surfing pictures before we depart this wonderful surf spot!

Hi sweetie,  Glad to see the update but could I suggest that you shorten the essay on the illnesses endured by you and Nicholas.  Much as I love you, the blow by blow account is too much, and for others I feel it would be a real turn-off.
Hope you are continuing to mend and the driving is okay. Love, Mom